Born in Clinton, Indiana in 1944, Maurice Costello was drafted into the United States Army in February of 1967. He served for two years, one of which was spent on a tour of duty in Southeast Asia during the Vietnam War. In the years after his return he married, had two children, and received a bachelor’s degree from Indiana State University and a master’s degree from the University of Evansville. He taught secondary art and worked as a guidance counselor for 29 years. Throughout this time, he actively repressed his memories of Vietnam.

After nearly three decades of civilian life and eschewing his past experiences, Costello began to allow these recollections and reflections to reemerge through his art practice. Eventually the exploration of his memories resulted in his first installation related to his military experience titled “Autobiography”, has been a prized part of the National Veterans Art Museum’s permanent collection since 2009.

Beginning August 17th, NVAM will exhibit the “Autobiography” series, including a brand new and final portrait of the artist, along with Costello’s entire collection of artworks related to his memories Vietnam and post-military life in Maurice Costello: Back to “The NAM”. The exhibit expands on the original four works to fully develop the artist’s visual sojourn tracing his life experiences from the callowness of adolescence through the trials, terrors, and triumphs of the war and its aftermath, and finally to a mature tranquility achieved nearly five decades later. The works featured in “Back to ‘The NAM” depict personal recollections and sometimes haunting images that lay bare the emotions that have never before been shared by the aging combatant and provide a deeper introspection into the horror that is war. This collection of Costello’s work provides a vivid representation of the evolution and breadth of his approach to art and life.

As a part of the culmination of this project, Costello recently returned to Vietnam with his wife and found that the experience was especially enlightening. The stark contrast between the early memories that inspired this exhibition and the understanding of the healing that can take place on both sides with the passing of time have served to bring about a final reconciliation, recognition, and peaceful closure that was “The NAM”.

NVAM Executive Director, Brendan Foster, states, “This exhibition truly reflects the roots and character of NVAM’s mission, and we’re honored to share Maurice Costello’s artistic journey through his memories of military service and the process of reconciliation through his compelling art.”

Maurice Costello: Back to “The NAM” has been extended through Winter 2020 and is partially supported by Bank of America and the Rabb Family Foundation. 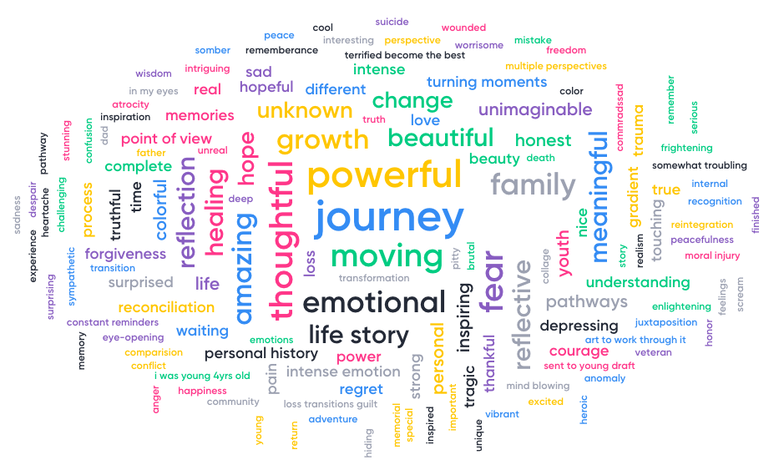 Word cloud responses from visitors reflection on the symbols, images, and feelings in "Maurice Costello: Back to 'The Nam'