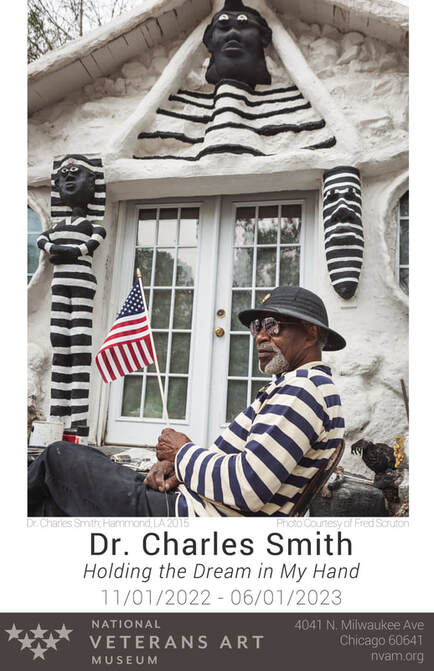 Dr. Smith explains that his artistic expression is drawn from a lifetime of spontaneous and divinely inspired experiences lived
as both a black man and Veteran. As a teenager in 1955, Smith recalls his mother bringing him and his siblings to the funeral of Emmet Till; a moment that would profoundly impact his future development and determination as an artist, who now regards his work as an expression of his lifelong commitment to righting history, teaching social justice and preaching anti-racism.

“My art addresses racism from a historical perspective. It represents the slaves as well as African American inventions, contributions and achievements, and defense of the United States.” – Dr. Charles Smith

Later in 1966, Smith was drafted into the U.S. Marine Corps. Smith served two years as an infantryman in Vietnam before being honorably discharged in 1968. Like many Veterans during that
time, Smith left Vietnam with severe physical, psychological, and spiritual wounds, resulting in lasting post-traumatic stress disorder (PTSD) that would have a perpetual impact on his work life and relationships.

After purchasing a property in Aurora, Illinois in 1986, Dr. Smith's artistic journey began with a commemorative sculpture of a fellow brothers in arms who died in Vietnam. Over the 24 years, Smith transformed his home and yard into a sculptural environment containing six hundred individual works that commemorated African American history from slavery to the present. This site was named the African American Heritage Museum + Black Veterans Archive. Over two hundred sculptures from this site can be found
​at the John Michael Kohler Arts Center in Sheboygan, Wisconsin.

Several years later in 2001, Dr. Smith moved to Hammond, Louisiana and began work on the second site of the African American Heritage Museum + Black Veterans Archive, which remains active to this day. Both site-specific sculpture environments are considered by Dr. Smith to be “gifts” to their respective communities, rather than pieces for mainstream art audiences.

NVAM would like to thank Dr. Charles Smith for his commitment to and enthusiasm for this exhibition and our Season Sponsor -
​Bank of America. NVAM is dedicated to presenting veteran-created art inspired by combat and military service, with a collection that engages all audiences to think about the impact of conflict on our society, community, and nation. Visitors are invited to discover Dr. Charles Smith’s exhibit, as well as some of the over 2,500 veteran works in the NVAM Permanent collection, at 4041 N. Milwaukee Ave., Chicago, IL 60641 from November 1, 2022, through June 1, 2023.